I have just put the finishing touches to a series of daily blog entries describing my trip to see Sri Chinmoy in November 2006. 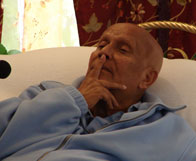 Sri Chinmoy meditating with his students...

Three times a year, hundreds of Sri Chinmoy's students gather to meditate with their teacher, and join in the whirlwind of activities and events that spring out of and run alongside our meditations: soulful singing, virtuoso intrumental performances, spiritual theatre, helping with initiatives for world harmony, humanitarian work, sporting events ranging from two mile races to marathons and ultra-marathons, a full-fledged circus (!), and an annual giant team effort to break a Guinness World Record!

A definite emphasis on joy :)

I'm not sure there's anything quite like these visits anywhere else in the world, and so I've tried a few times to encapsulate something of the atmosphere of these visits to share with people who were not there; I also wrote a daily diary of my visits in November 2005 and April 2006 . I usually visit New York to see my teacher in April, August and November of each year, but in April and August I throw myself into every activity going and there's not so much time for writing (which explains why I didn't write a daily account of my visit in August). However, November is generally the quietest of the three times in terms of things to get involved in; there is less of the whirlwind of events I described above, but at the same time that makes it much easier to write about. 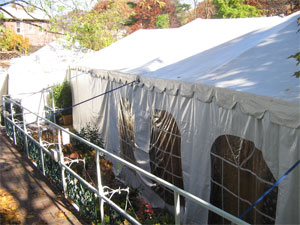 Here's where all the meditations were held. In April and August we'd be all sitting where the photo was took and everything would take place in the open air; unfortunately the weather is not that kind to us in November! Whilst you're looking at the photo, do you see the colour on those trees? Thats another reason why I love coming here in November; it's like we get an extension on autumn with all its colours.

I hope, dear reader, that you won't take my daily doings and experiences as typical for every student who went to visit Sri Chinmoy in November. Sri Chinmoy has students of such vastly differing personalities and temperaments, and another daily diary picked at random from the people who were there might read very differently! For example, you'll see that whenever I'm not meditating, I look to busy my time with some other spiritual activity like running or helping people. But other people on the same visit might like to take a day or so to go seeing New York's famous sights, or prefer to catch up with all their friends from all around the world who have also arrived to meditate with Sri Chinmoy. There is no right or wrong way, the way I do things is just the way I am; I've always been happier when I'm busy doing something useful for others. (P.S I have to thank my dad for this, for sending me out working on the farm as a child on those cold winter nights when all of my cooler-than-thou schoolmates were comatose in front of the telly)

Lastly, I have to give a big thanks to my friends Dmitriy Volkov and Alexei Levchenkov from Smolensk, Russia for supplying most of the photos for the blog.

OK, so on with the show....you can either see the entries one page at a time or get all the entries lumped together on one page (for the latter, you'll have to start at the bottom and scroll up to get them in the correct chronological order).

I do hope you get some joy from reading them.